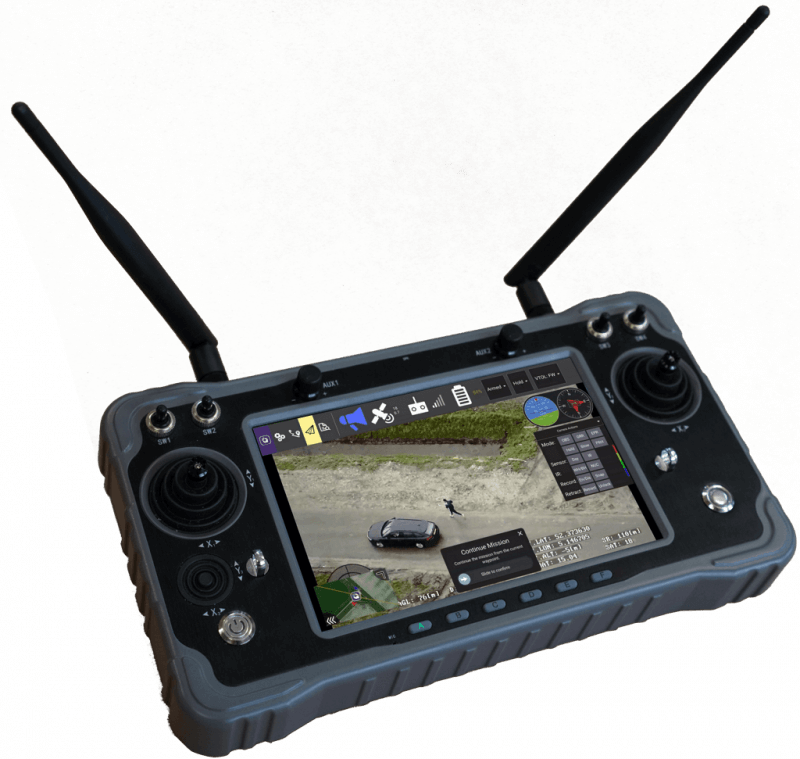 After several months of R&D based on years of customer feedback, and the latest innovations in the field of data transmissions and UAV control, Vertical Technologies is proud to introduce the DeltaQuad Controller.

The DeltaQuad Controller is an integrated UAV data link and remote control solution that leverages the latest innovations based on D2D technology. This means the easy to use hand-held remote control solution can offer up to 50KM HD video transmission. Furthermore it offers seamless switching to LTE based encrypted communication where available. This makes the DeltaQuad Controller the first remote controller that can stream both HD video and Command & Control data over long distance encrypted D2D radio signal, and/or using the LTE network with unlimited range.

All DeltaQuad models equipped with the DeltaQuad Controller are now suitable for both full/semi autonomous operation as well as easy manual (guided) control through standard joystick input.

The DeltaQuad Pro #VIEW will now come standard with the DeltaQuad Controller. This means that, in addition to the existing features, the system will now offer;

Radio ranges to up to 50KM

Leveraging the latest D2D technology, the DeltaQuad Controller can transmit live HD video with very low latency over vast distances. The Standard package offers up to 30KM HD video range in FCC compliant mode, and up to 25KM in CE compliant mode.

Using the long range solution which amplifies the signal to several watts, and the usage of a simple to install directional antenna attached to the controller, can achieve transmission ranges of up to 50KM with HD live video. To operate the extended range package a permit might be required by your local regulatory body.

The DeltaQuad models were designed for fully autonomous flight from takeoff to landing. Using the DeltaQuad Controller adds pilot control options by a simply flicking a switch. In pilot guided mode the DeltaQuad can be operated intuitively with the need for skilled fixed wing UAV pilots. In guided flight mode the UAV will maintain altitude and heading until the pilot touches the joystick to control the vehicle. Simple up/down and left/right joystick input commands the vehicle in any desired direction. Combined with the large touch-screen command interface with integrated satellite maps and live FPV video, the system can be easily operated over large distances. In hover mode (during takeoff and landing), these same controls allow for easy pilot intervention. Once pilot control is activated in hover mode, the DeltaQuad will remain hovering until an instruction is received from the pilot. Intuitive joystick operation allows manual control of the UAV identical to any standard drone. This facilitates precision landing and provides a more intuitive method to take manual control of the vehicle.

We’ve worked hard to get this done right and we are extremely satisfied with the end result. Thanks for reading!